The ENSEMBLE THIS / ENSEMBLE THAT will perform my composition ESKALATION for percussion quartet, acousmonium  and light.

TROST will release the vinyl version of SPRAWL – a project with Peter Brötzmann, William Parker, Alex Buess, Michael Wertmüller and Stephan Wittwer. The project has been recorded 1996 on CD. The release date of the LP is 04/28/2015

The long awaited JOLT FESTIVAL COMPILATION has appeared in a double release @ A TREE IN A FIELD RECORDS. You can order it here ! 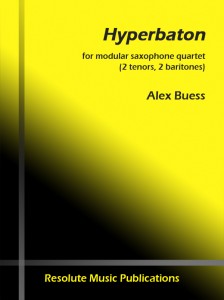 Dedicated to the world-renowned XASAX quartet, composer Alex Buess presents this incredible modern piece for modular saxophone quartet. Drawing on a number of music styles, Buess composed this piece for 2 tenors and 2 baritones (TTBB). A multitude of extended techniques are employed, including multiphonics, slap-tonguing, growls, and even ‘dental’ notes – playing with the teeth on the reed. The resulting sonic palette is both extremely interesting for the audience and a serious challenge for even the most skilled quartets.

The ENSEMBLE PHOENIX BASEL will perform my work Phylum for solo Percussion, large ensemble and live-electronics at the SUDBasel on 2014-06-01/02.

The ENSEMBLE KONTUR will premiere my work Enigma for saxophone, violoncello, electric guitar/live-electronics at Gare du Nord, Basel on 2014-05-28 will be performed

Skuto for SABRE (SENSOR AUGMENTED BASSCLARINET) commissioned IGNM ZÜRICH will be performed on 2014-04-05 at the Walcheturm Zürich.

My new work Apsis for 8 Windinstruments and percussion commissioned by TAGE FÜR NEUE MUSIK ZÜRICH will be played in concert on 2013-11-17.

Sebastian Hofmann will perform my piece N.S.for percussion, electronics, tape and video (by Christian Lichtenberg) in severeal concerts with his new program “METALL-MAGNET” on 2014-1017 to 2014-10-30

In preparation: a CD with selected composed works is planed to be released towards the end of 2014

May 2008: the 16-17 CD Gyatso has been re-released in a remastered version by Weasel Walter with new extended liner notes by Jason Pettigrew (Alternative Press) on Savageland Records.

The Ensemble Modern directed by Johannes Kalitzke performes my work AXIS_CORE commissioned by SWR/Donaueschinger Musiktage. The concert of 2007-10-20 is broadcasted live on SWR2 in 5.1. surround

New CD of the Ensemble Phoenix

The new CD of the Ensemble Phoenix Basel with works of Tim Hodgkinso, Dror Feiler and Alex Buess is available here.

On 2005-04-24 my work Y for saxophones and live-electronics will be premiered by Saxophonic (Lars Mlekusch – saxes and Thomas Peter – live-electronics) at Gare du Nord Basel.

Lucerne Festival 2005: on 2005-09-17 at KKL Lucerne – Ghosts of Schizophonia (commissioned by Lucerne Festival and Pro Helvetia) andPhylum both for large ensembles with live-electronics will be performed by Cortex and Ensemble Phoenix Basel directed by Jürg Henneberger